Liguria is in north-western Italy, bordering with France. The region has an impressive contour that includes mountains and lovely rolling hills, colored by the green Mediterranean turf and overlooking the Ligurian Sea. This amazing region is known all over the world for the coastline where the waters of this section of the Mediterranean are an enormously important feature of the region, with its characteristic rocky coasts interrupted by small coves, and beaches of fine golden sand.
Nature, mountains, culture and entertainment are all a big part of this splendid region.
The Cinque Terre and the Gulf of Poets, the Gulf of Tigullio, Genoa and Paradise Gulf, the Riviera delle Palme and the Riviera dei Fiori are the areas pf the famous coast of Liguria which stretches from Ameglia to Ventimiglia, for more than 300 km. Some of the most famous tourists resorts are: Santa Margherita, Rapallo, Sestri Levante and Chiavari. Places full of history, culture and traditions, which witness the passage of ancient habitants that arrived from the sea.
The extensive woods of Liguria with their centuries-old trees, a true natural legacy, are an excellent alternative to traditional tourism.
The capital of Liguria is Genoa which is a UNESCO World Heritage site. A multi-faceted city that is both antique and modern. In the antique city centre, taking a walk along the old streets “ carruggi”, you can find incredible building from the 16th century and the Renaissance palaces that will surprise you and take your breath away. 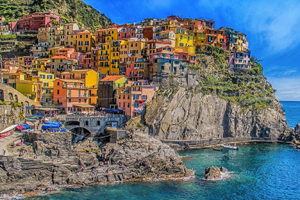 Cinque Terre by the Sea