Everchanging, untouched landscapes in the green of winding valleys make Umbria a region that will never fail to amaze. This region comprises mainly hills, mountains, hollows and plains and extends along the Tiber’s central basin.

At the heart of the boot, it is the only region with no coastline.

It includes Lake Trasimeno, central Italy’s largest lake. The area still has the remains of Etruscan settlements, particularly around Castiglione del Lago, where the loveliness of the natural landscape combines with the romanticism and stillness of the lake.

Moving on from the two lakes, we come to the Cascate delle Marmore waterfalls near Terni, which with their 165 meters drop are some of the most beautiful in Europe.

Still in the province of Terni, tourists looking to get the feel of Umbria should not miss out on two little gems: Carsulae, an ancient Roman town traversed by the ancient Via Flaminia where we can still see the remains of the S. Damiano Arch, and the Dunarobba Fossil Forest, a rare example of a forest that existed 3 million years ago, with very well-preserved tree trunks set in a lunar landscape. 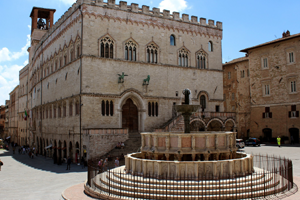 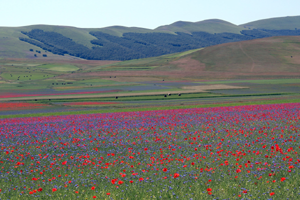